“Live your rock-solid values even when no one is watching,” Mike Bollinger said. “Be genuine and work towards earning someone’s trust.”

That is one of the things he has learned in his 27 years in the financial service sector.

Bollinger, now a financial advisor, has been with Edward Jones Investments going on 22 years.

“My first job out of college was as an infantry second lieutenant leading a platoon of men,” he said, noting he served in the army a bit over 20-years. “One of my hobbies while in the service was saving and investing and trying to teach my soldiers to do the same.”

Bollinger said, when it comes to finances, there is something for everyone.

He said he has established educational funding plans for 3 month-old babies and has attended two 100 birthday celebrations for his clients.

“They were not only celebrating life but that they still had money to give to their grandkids,” Bollinger said.

He said Edward Jones Investments has been in the Tall Oaks Corporate Center since the beginning of 1998.

“It’s a friendly town willing to give even outsiders a chance at success,” he said.

“Business owners form the heart of our entrepreneurial system,” Bollinger added. “They are genuine and usually put their heart and soul into their business and relationships.”

The South Dakota native served in MSBA leadership positions early in his career at Edward Jones and said the biggest challenge to the association is achieving “sustained growth that is meaningful.”

A graduate of West Point Military Academy, Bollinger has lived in Medford since 1993.

In his spare time he enjoys travel, reading, training for triathlons, and being with his family. 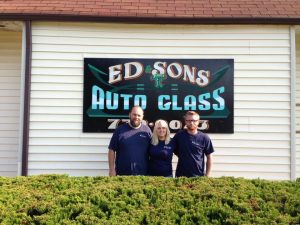 Michael Woods, owner of Ed and Sons AutoGlass, Inc., says one thing he’s learned about running a business is how you interact with patrons.

Woods has spent 42 years working at Ed and Sons, which has been in town 55 years.

“My father started this business and as a young child I learned the business,” he said.

According to Woods, what makes his business unique is that it is family owned and operated.

While he does not hold a position in the MSBA, Woods’ wife, Lisa, attends meetings.

“She enjoys learning from other town business members,” he said.

“[It’s a] great town to be in business,” Michael added.

Asked what the greatest challenge the Maple Shade Business Association faces, he replied “the current pandemic.”

A lifelong Shader (58 years), Michael is a graduate of Maple Shade High School who said spending “time with my family” is what he likes to do when he’s not working.